Skip to content
The Aahar Yojana  in Odisha provides Bhata (boiled rice) and dalma at designated places every day from 11 am to 3 pm. The total cost of the food served (rice and dalma) is around Rs.20, but the state government provides it at a subsidized rate of Rs.15. The poor people of urban areas will get it at Rs.5 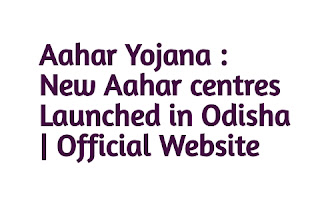 New Announcement :Most recently in February 2019, the Chief Minister of Odisha inaugurated 38 new Aahar centers in the state. Now after this announcement there are 157 Ahar centers in all the districts of Odisha. The working poor and workers in urban areas will mainly benefit from the Ahar Yojana. The state government is covering 56 hospital complexes under the Odisha Ahar Yojana. The All India Institute of Medical Sciences (AIIMS) near Sijua is one of these hospitals.

Now according to the new update, anyone from the state can sponsor Ahar food of their choice. Anyone who wants to give food to poor people on a particular day like birthday, marriage or death or in memory of loved ones can sponsor Ahar Food scheme. Under this scheme people can donate money and donations are accepted online on the official website. Donations made under this scheme are completely tax free.